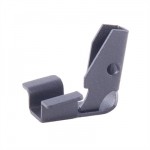 Here are a couple accessories I think every AK-47 owner needs to outfit their rifle with. They make Extended Magazine Releases for Ruger 10/22, AR-15′s, AR-10′s, and everyone else. It’s about time someone made a nice reliable Extended Magazine Release for the AK-47. To install it you remove the original magazine release, and then using the stock spring you re-install the Extended Magazine Release from RAM. Really simple install. Whether you are using your AK-47 for operating purposes or just like to dump several rounds down range, this is a must have part for your rifle. No one likes a delay when having to change magazines. 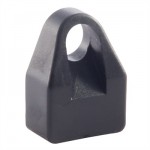 Another great upgrade for the AK-47 is a nice recoil buffer. A recoil reducing buffer covers two primary objectives. The buffer will reduce recoil by cushioning the blow back of the bolt, it is a night and day difference. The second thing it helps is overall wear of the rifle. Every time you squeeze the trigger and the gas blow-back cycle completes, ever part in that rifle is affected by the jutting halt of metal on metal. By installing this recoil buffer at the end of the blow-back cycle, you are going to really extend the life of your internal parts.
AK-47 Recoil Buffer

Skeptical? Quit being a cheap skate and drop a few bucks to try them yourself. Both of these AK-47 Accessories get “Two-Thumbs” up from me. I guarantee you these will make your AK-47 shooting experience much more enjoyable. I have inserted a couple links to read about them at Brownells.com.

The Polish P 64 is a reliable and inexpensive concealed carry pistol that packs quite a punch.

These are the Best Glock Modifications in my Opinion. Feel free to comment.

Co-Witness or not to Co-Witness that is the question and other SNAFU’s to keep in mind.

Awesome way to make dissasembling and reassembly of Ruger 10/22 much easier.